I would tell this is the first inspiring weekend since I have been in Glasgow. Last Tuesday, I was invited for attending one of Mrs.Ani’s friend’s launching event , The Bashir Maan Archive, Scotland’s first archive dedicated to preserving the contributions of Scottish Moslems.

Well, honestly, I dont know who is Bashir Maan? But, the words “contribution” and “moslem” has attracted me to join. In addition, this event was held in one of venue which is noted in my-list-to-go, Mitchell Library, the biggest and the first public Library in Glasgow. So, there was no reason not attending this event, called it such kind of my curiosity.

When I arrived, I was shocked enough and immediately looked at my appearance for that day. I wear, as usual, casual student style from top-to-toe. Surprisingly, All ladies and gentleman I have met, seems like an important person, either she/he is a politician, entrepreneur, or someone who sits on the executive board of a company. I thought, “Oh my God, it is kind of a formal event !” However,I still, with innocent face, entered the venue and straight forward to food corner, hehe. I just believe it will be beneficial event for me, whether it will inspire me or just adding experience.

the agenda, then, was opened by MC. And at that moment, I just understand who is Bashir Maan, yet about the aim of the archive he gave and the project inside, The Colourful Heritage (check also www.colourfulheritage.com).

Bashir Maan was the first moslem who has been elected as councillor in UK in 1970. He migrated to UK in the early 1953 as a student and became to be the first generation Asian Moslem who live in Glasgow and build the next generation. Maan and other Asian moslems until today has played many significant roles in developing this country, specifically Glasgow city, including in infrastructure, economics, or Scotland values of life.

Glasgow Islamic Centre and central mosque is one of Maan’s contribution for moslems. Asian people who move to Glasgow, especially from Pakistan, led to the diversity of culture in Glasgow nowadays.

The Bashir Maan Archive is one of document was given and under project the Colourful Heritage. This project is conducted to record as many stories from the first generation. Hopefully, the ‘heritage stories which full of wisdom’ not only to inspire the future generation but also try to show what contribution as well as enduring legacy early migrants have left.

The Pakistani Muslim community is now the biggest ethnic group in Glasgow. Born and brought up in Scotland, the later generation now making remarkable improvement in some ways, including business, politics, education and health related industries. Moreover, these early migrants made Natives Scotland currently really open with Asian and moslems community.

I gained many lesson learned from Maan’s inspiring stories, particularly about Islam itself. we already knew that Islam is religion which full of peace and was created as Rahmatan Lil Alamin. We, as a moslem, should remember that we have responsibility to create peaceful environment, so that it important when trying to give positive value as well as obvious contribution for society in our current location, although we are not local citizen. Thinking about community improvement is easy, but execute it into action is quite difficult.

Have a nice effort to spread positive things for others ! 😀
life is wonderful, love is beautiful, giving is so powerful 🙂

A wife and mom of two. Always try to color the world. Love share and give. Life is compared to a voyage! Get inspired from around the world. A pharmacist. View all posts by Yangie Dwi 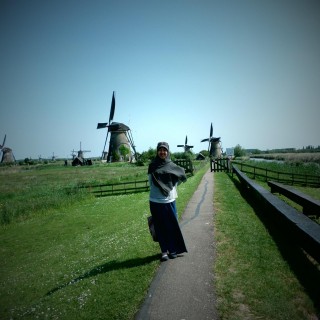 A wife and mom of two. Always try to color the world. Love share and give. Life is compared to a voyage! Get inspired from around the world. A pharmacist.